All Collections
Reading Your Dashboard
Understanding Your Charts - Survey

Written by Kirsty Pinner
Updated over a week ago

Your SentiSum Survey dashboard is designed to highlight reasons why your average rating and sentiment has increased or decreased.

Sentiment is shown as a percentage and based on only the written responses to the survey questions:

Here, when we look at the last week, we can see that there were 89 survey responses that mentioned Website Usability, and 79% of them were positive mentions. The sentiment of Website Usability also decreased by -7 compared to the previous week. 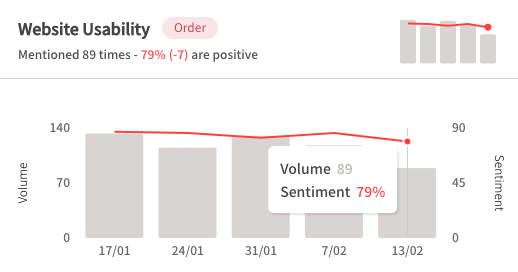 In the example above, we can see that when selecting the last week of data, this is represented in the last bar of the chart, and the previous 4 weeks are in the first 4 bars. This is so that we can compare recent changes in a longer-term context.

For example, this sentiment decrease of -7 might seem serious. However, looking at the historical trend over the last 5 time periods, we can see the Website Usability sentiment has steady fairly steady over the last 4 weeks and could indicate a less serious problem.

When the latest change is an increase, the sentiment line is green because sentiment increases usually have positive consequences.

When there has been no change since the previous time period, the sentiment line is grey.

When the latest change is a decrease, the sentiment line is red because sentiment decreases usually have negative consequences.

Did this answer your question?